Pennsylvania - A global pandemic, newly implemented voting reforms, and the harmful rhetoric of President Trump have all been forces sowing doubt into the minds of the electorate. As voters prepare to cast their ballot in person and via vote by mail methods in November, PA Stands Up is working around the clock to make sure everyone can have their voice heard and their vote counted. And we're demanding that the Pennsylvania legislature and County Boards of Election make necessary reforms and investments so that can happen.

In the days after the June 2nd primary election, the PA Stands Up team surveyed voters across Pennsylvania to get a sense of their experience on election day. Over 1000 survey respondents shared their experiences, including widespread lack of PPE, confusion about where and how to vote in person and by mail, and paper ballots that did not arrive to voters or to Boards of Election on time.

Act 77, which allowed universal, no-excuse vote by mail, created some of the infrastructure necessary to adapt to the constraints of a contagious, deadly, respiratory virus. According to our survey, this method was very popular, with 64% of surveyed respondents voting safely by mail. Unfortunately, 13.1% of voters surveyed requested a paper ballot and never received it. There were also substantial delays in the receipt of ballots, with less than half of respondents reporting that they received their ballots in two weeks or less.

A number of these voters were unable to cast their ballot as a result of these errors. As one voter from Delaware County reported in the survey: "The ballot never came in the mail even though it was approved and the status said it was mailed. I never received it. I live with an immunocompromised person and I couldn't risk the in person poll. Disappointed doesn't begin to cover my experience."

Voting in person was also a confusing and stressful process for too many, with a postponement of the primary election from its original April date to June, the closure of many polling places to reduce the risk to election workers, and a lack of effective communication to all voters about this information. A lack of PPE, a lack of training on new voting machines, as well as misinformation about how and where to vote resulted in high levels of frustration from in-person voters. Less than 47% of respondents who voted in person felt that their polling place was safe during the pandemic and 11.4% of voters surveyed waited longer than 60 minutes to cast their ballot in person. Provisional ballot issuance increased across the board. In Lancaster County, that increase was truly colossal: a 367% increase over previous years.

“Voting is a paramount right of a thriving democracy, and the Pennsylvania legislature has failed in its role to uphold that institution,” said Michaela Purdue Lovegood, Deputy Executive Director of PA Stands Up. “Legislators must take action now to provide adequate resources and training to election workers, and County Boards of Election must learn from the failures of this primary. Voters across Pennsylvania are counting on them all.”

PA Stands Up is proposing the following reforms leading up to the 2020 Presidential Election, and we call upon the Pennsylvania legislature and County Boards of Election to take action immediately to:

In the meantime, the chapters of PA Stands Up will be making contact with voters themselves, registering them to voting safely at home via paper ballot, registering first time voters, and engaging communities in this critically important election.

To learn more about our data or to report on our findings, contact Colleen Kennedy (ckennedy@pastandsup.org). 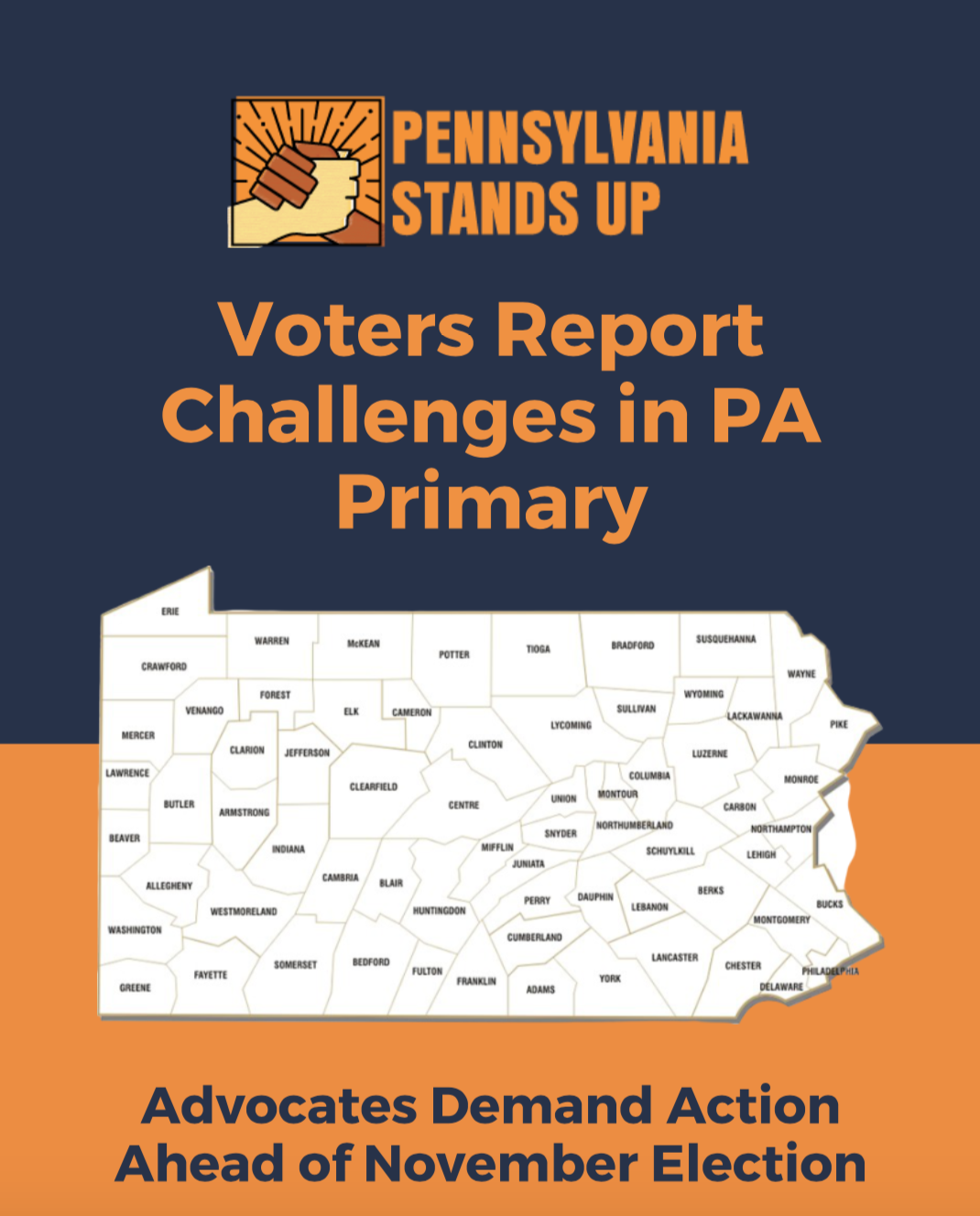