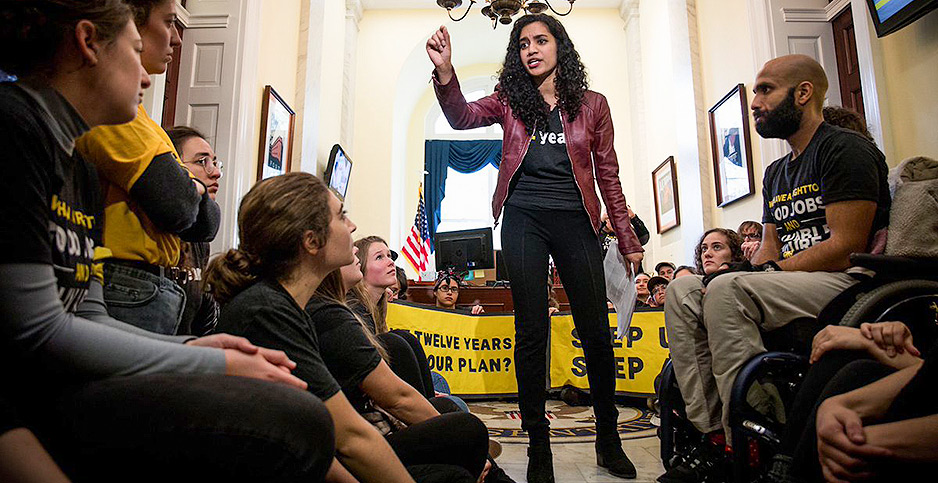 The COVID-19 crisis is exposing the failures of a system that puts the profits and power of a few over the wellbeing of the many. We are witnessing a failed state—government that lacks the ability, or the political will, to confront the crisis at hand and meet the needs of its people.

Varshini Prakash has been thinking about crisis for a long time—specifically the unfolding long-term crisis of climate change. She’s been instrumental in building a powerful movement of organized young people to confront the climate crisis. Varshini will discuss the systemic causes of the current crisis, and how this moment presents us with an opportunity for massive systemic change—if we seize it.

The virtual forum is scheduled for Thursday, April 30th, 7:00-8:15pm EST. To attend, you must register here.

Jonathan Smucker, Co-Founder of Pennsylvania Stands Up, will moderate the discussion, which will include questions from the audience.

Varshini Prakash is the Executive Director and co-founder of Sunrise, a movement of young people working to stop climate change, build economic prosperity for all through a Green New Deal, and elect a new generation of progressive leaders to office. Varshini has been a leading voice for young Americans, inspiring thousands of young people to fight for the Green New Deal alongside the likes of Alexandria Ocasio-Cortez and Bernie Sanders and helped put the climate crisis at the top of the political agenda in the states.

This is the first in a series organized by Pennsylvania Stands Up focused on understanding the current crisis and also the organizing opportunity at hand. Forums will be held every other Thursday at 7pm. Stay tuned for details. All are welcome.