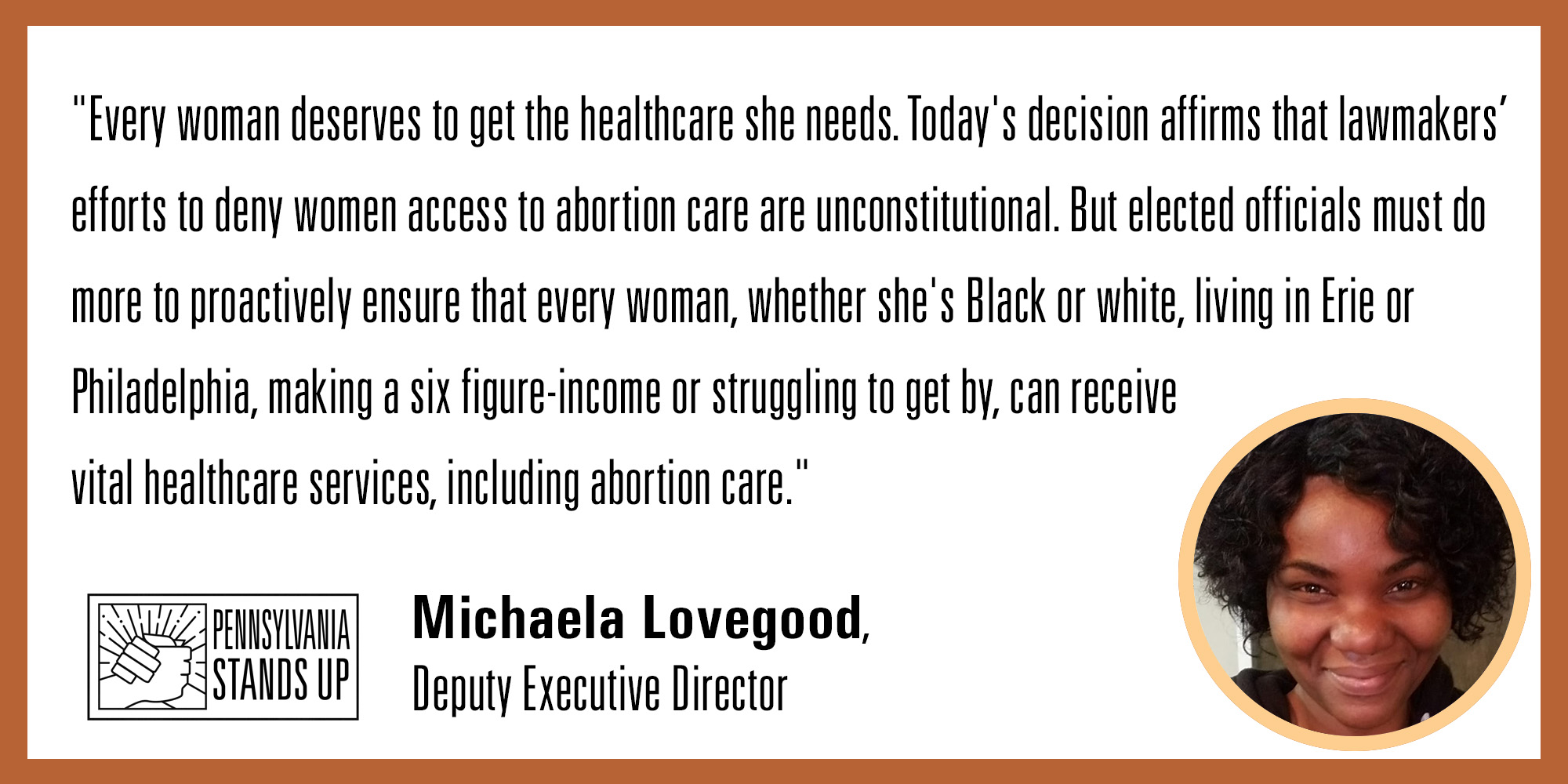 In response, a coalition of advocates in Pennsylvania said that, while they are thankful that the decision will protect current abortion access, they noted that for many communities there are still incredible barriers to not only getting abortion care, but barriers to staying safe and healthy overall. The decision comes in the midst of a nation in grief over violence against Black communities, a global pandemic, and an economic crisis, all which affect the health and well-being of people already struggling to make ends meet.

“For those who reach out to abortion funds like WMF, this kind of targeted anti-Black, anti-poor, anti-women violence is nothing new. Our callers spend most of their day jumping through hoops laid down by governments and institutions that aren't designed to really help-- only shame and punish,” explained Seneca Joyner, PhD, Manager of Community Organizing for Women’s Medical Fund.

Dr. Lisa Perriera of Philadelphia Women’s Center added, “Today’s Supreme Court ruling means that Louisianans are still able to access abortion care; but don’t mistake this decision for the real change we need. As a provider, I know people are still struggling to access abortion care in their communities, and this ruling doesn’t change that reality. We need meaningful change that puts their health, safety, and needs first. That must include abortion care being available to anyone who needs it, wherever they live, whoever they are, without cost being a barrier.”

"Every woman deserves to get the healthcare she needs," said Michaela Lovegood, Deputy Executive Director of Pennsylvania Stands Up. "Today's decision affirms that lawmakers’ efforts to deny women access to abortion care are unconstitutional. But elected officials must do more to proactively ensure that every woman, whether she's Black or white, living in Erie or Philadelphia, making a six figure-income or struggling to get by, can receive vital healthcare services, including abortion care."

According to the advocates, Pennsylvania has, for decades, been the epicenter of anti-abortion regulations, with the result being an overabundance of punitive restrictions hindering people's ability to receive the care they deserve. Pennsylvanians seeking abortion care face state-imposed barriers including coverage bans, mandated waiting periods, and forced parental notification. Had the Supreme Court upheld the Louisiana law, it would have open the gates to even more abortion restrictions and clinic shutdowns, the advocates said.

In reaction to the decision, local reproductive health, rights and justice organizations have vowed continued action to remove existing barriers and stigma related to abortion.